A Long Way Back tells the story of Harold Martin, a 99-year-old WWII POW survivor. Captured by the Japanese in the Fall of Singapore, Harold, a solider from Western Australia, spent two years enslaved at prison camps, forced to partake in the construction of the Burma Thai Railway. It was an undertaking that claimed over 12,000 lives—Harold’s, as fate would have it, was not one of them. Seventy years after his rescue, he embarked on a pilgrimage back to Myanmar and Thailand to revisit his past and pay tribute to his fallen comrades. It’s here—as he walks beside the rusted trains that once carried prisoners on a hellish journey to the camps—where his irrepressible spirit shines. Though many would consider his a story marked by terrible loss, Harold stands strong: walking for himself, speaking with utmost clarity, and telling his story for the very first time. 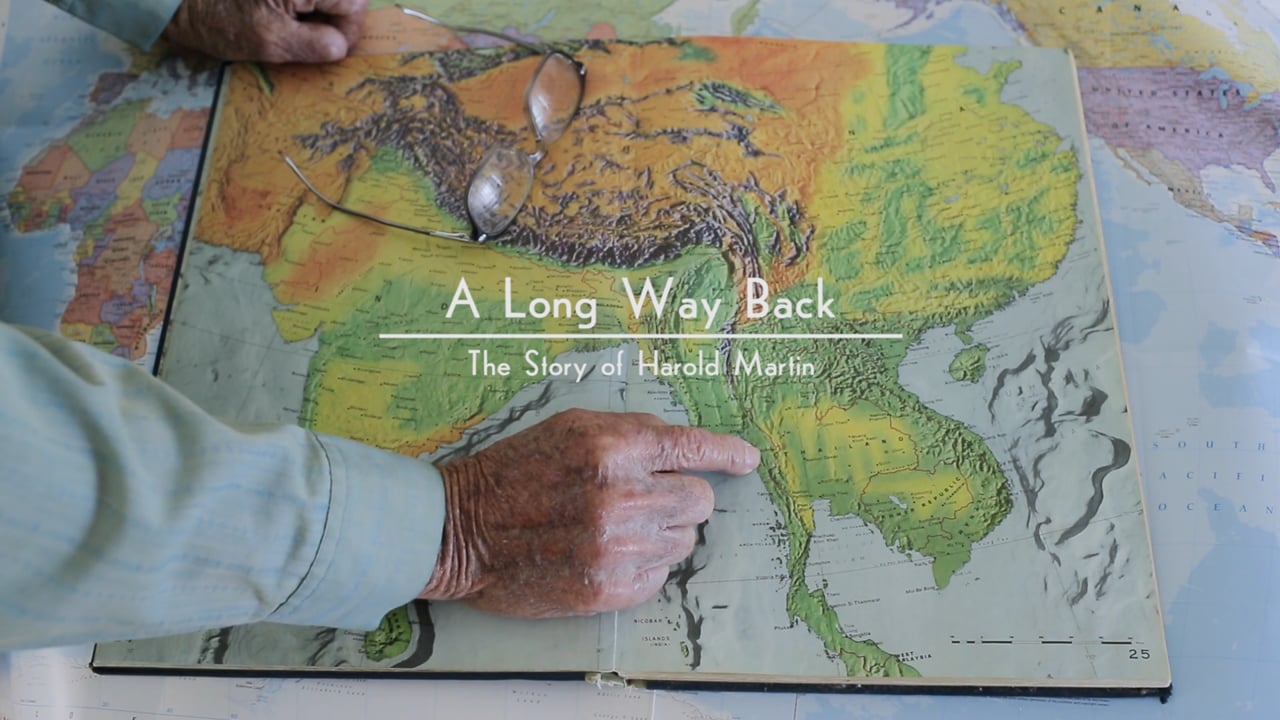 A note from the filmmaker:

I first met Harold many years ago through my parents, Morris and Gwen Blake. As a resident in our hometown of Albany, Western Australia, he had been a faithful customer at their cafe, Dylans on the Terrace, for quite a long time. Over the years, he and my mother struck up a friendship, and slowly, Harold’s epic tale of survival was revealed through their daily conversations.

Since then, my parents have been helping Harold revisit a few of the landmark locations of his lifetime. They traveled first to San Francisco—a grueling 40-hour journey—to visit the submarine USS Pampanito, which rescued him in the China Sea after a torpedo attack on a Japanese warship in 1944. Harold had been a prisoner on the ship, spending four days in the ocean after the attack before he was saved. He and my mother made this pilgrimage in 2008, and it was that trip that sparked Harold’s desire to travel back 70 years to Myanmar and Thailand, the sites of his capture and imprisonment.

In 2012, my father and a few close friends offered to take Harold to Myanmar, which at the time, had recently opened to tourism. It was Harold’s wish to find the gravesites of three of his fallen mates, and this was his first opportunity to do so. I decided to join and document the adventure, and this was where A Long Way Back began.

The making of this documentary, which involved both video and stills, has occupied the better portion of the past 5 years—but it’s been life-changing. I’ve traveled with Harold to Myanmar and Thailand, which has given me the good fortune of hearing his incredible story firsthand. I’ll never forget walking with him alongside the original Japanese trains that carried POWs on the five-day journey from Singapore to camps in Thailand. Even after working on the film for years, it wasn’t until seeing the inside of one of those train cars when it really all hit me—the harrowing reality of it all, and Harold’s awe-inspiring resilience. (At 99, he lives alone and continues to cook, drive, and care for himself.)

I’ll close with a favorite memory. As documented in the film, Harold journeyed to Thailand in 2014 to attend the ANZAC Day service at Hellfire Pass as a VIP guest. I surprised him by making the trip, too, showing up one morning at the door of his hotel room in Bangkok. I was nervous that I might give him a heart attack from the surprise, but instead, he smiled and pinched me to see if I was really there.

It’s my pleasure to share Harold’s remarkable story with viewers who might not otherwise know of the plight of POWs on the Burma Thai Railway—and whose lives may be enriched, as mine was, by Harold’s warmth, vitality, and heart. I hope you enjoy.

A Long Way Back tells the story of Harold Martin, a 99-year-old WWII POW survivor. Captured by the Japanese in the Fall of Singapore, Harold,...

A note from the filmmaker:I first met Harold many years ago through my parents, Morris and Gwen Blake. As a resident in our hometown of...
×
Using Format